Why is there no ethnic diversity across Wales’ headteachers?

Whilst scrolling a BBC news feed an article caught my attention regarding headteachers in Wales. The story reported that out of Wales’ 1,245 headteachers 1,240 were White and five were not. Being of mixed race I immediately felt proud that I was in what was obviously a very exclusive group (it works out as 0.4% of all headteachers in Wales) but then I started asking myself why was that so?

My father emigrated to the UK from Aden in Yemen and met my mother in Northampton where I grew up and went to school. As you can imagine multiculturalism was common place in a town so close to London. I became acutely aware of the fact that I was mixed race when studying at Bangor and even more so upon entering Wales’ teaching profession. It wasn’t that I was treated any differently or suffered any form of prejudice, as I know others have, it was simply the fact that everyone I worked with and pretty much all the children I taught were White. I am now the headteacher for The Federation of Ysgol Bryn Clwyd and Ysgol Gellifor in rural North Wales and can honestly say I have not had to overcome any racial barriers to get to where I am today. This is why the article caused me to question why this minority group even exists in the first place. Is it simply because there aren’t enough people from different ethnic groups living here in Wales? The article seemed to suggest not, mentioning that “nine in ten of the 480 children at Kitchener Primary in Cardiff, are from an ethnic minority. However all but one of its teachers are white.”

The National Academy for Educational Leadership’s current remit includes “supporting the development of future leaders from ethnic minority backgrounds to become leaders in the Welsh Education system.” Reading this part of the remit has helped me to start to answer the question I had been asking myself from the beginning. It is less about the lack of diverse talent in Wales but more that for whatever reason this multicultural talent pool is not entering the teaching profession nor progressing into leadership roles. Which in turn has me asking so many more questions such as why is education not as diverse as other sectors? How can under-represented groups be encouraged to join the workforce? What does positive discrimination look like in practice?

With these questions in mind I am looking forward to soon meeting the others that make up 0.4% of Wales’ headteachers and as an Associate of the National Academy for Educational Leadership I will endeavour to support the work needed to deliver this part of the remit.

You can read the BBC article in full here. 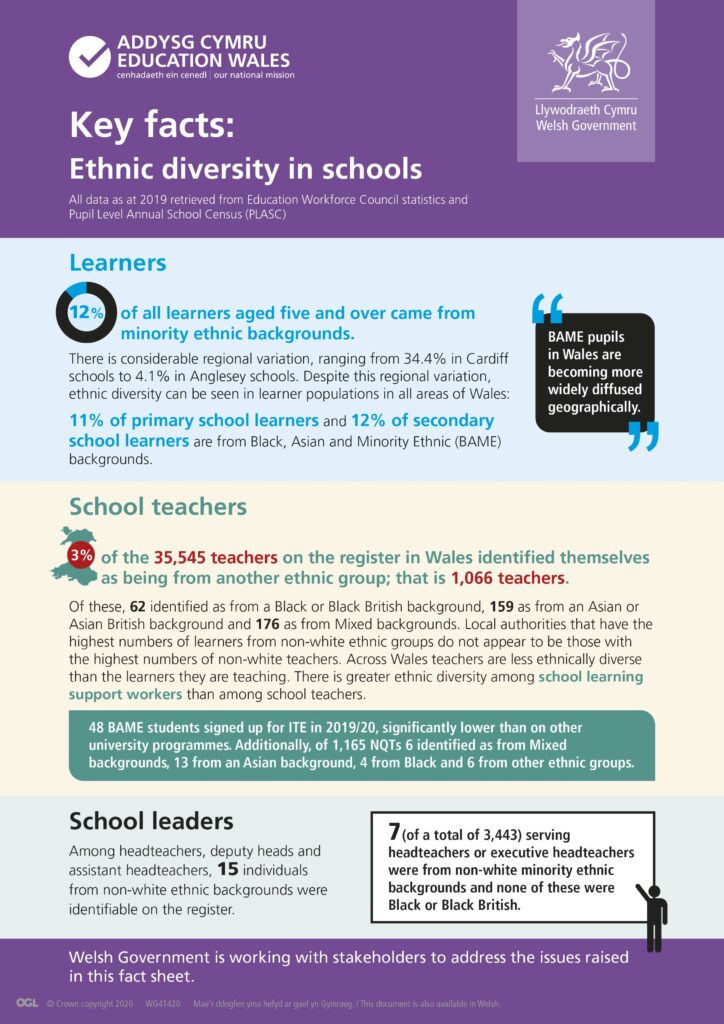 More worrying is this 2019 Welsh Government document which reports that 7 (of a total of 3,443) serving headteachers or executive headteachers were from non-white minority ethnic backgrounds and none of these were black or black British.