All children have a right to education, right?

All children have access to high-quality education regardless of skin colour, don’t they?

A recent trip to the Czech Republic, to learn more about Roma communities seemed to suggest otherwise. The purpose of the trip was to explore how Roma communities live in one of the home countries of pupils who attend my school. What a colleague and I experienced over the three-day trip suggests widespread racial discrimination and segregation of Roma communities. This discrimination appeared to be openly accepted by both the public and professionals that we met during the trip. 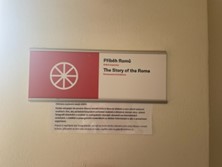 Our chaperones for the trip were Roma, all originally from the Czech Republic, identifying themselves as Czech Roma.  Two of our chaperones did not recognise the Czech Republic as ‘home’ and all three were keen to return to the UK. What we saw throughout the trip was difficult to observe, both the experiences of those sharing the trip and also those we met as part of the visits.

One such influencer was Magdaléna Karavová.  Magdaléna described the school system by explaining how all pupils from Roma backgrounds are medically diagnosed with a light mental disability by medical professionals and therefore attend special educational schools across the Czech Republic.  They are denied the opportunity of mainstream education due to this. Surely this couldn’t be right? In 2022? No way!

We heard about challenges to Government through legal processes and that Roma families / communities had won their cases, so it was time to see for ourselves.

The school visits were exactly what we were told they would be.  Special education schools are full of Roma children, exactly like the children who sit in the classrooms at my school. 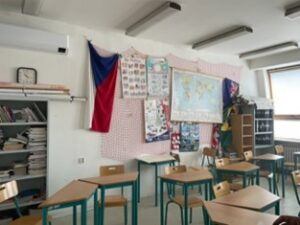 We observed a lesson. It sounded similar to the way the curriculum has developed in Wales – this lesson was Geography and Art combined. Great I thought, a combination of Expressive Arts and Humanities surely with some cross-curricular links to Literacy, Numeracy, Digital…but no, the lesson could not have been further away from the development of Ambitious Capable Learners that we aspire to create in Wales. There was no expectation for any pupil in the room to develop any new learning or any skill as part of the session.

A discussion with a school principal later in the trip made the position of the school leaders in the area clear. One principal described it as their role to ensure that the children were happy. The colourful display we were met with in the staff area had the slogan – come to school with a smile. This was all that was expected of their pupils. The majority of learners were Roma and expected attendance was between 40-50%. There were no expectations for Roma pupils to achieve anything throughout their time in school. 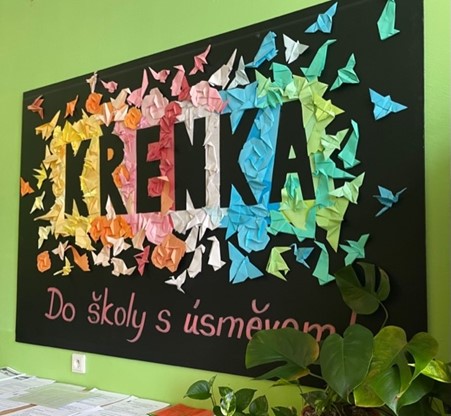 ‘Come to school with a smile’

We asked about children returning from the UK, some staff recalled one child who was doing well and wanted to go on to Secondary School (age 15 – 19/20 years) after they finished elementary school (age 6 – 15 years) but they lost their motivation over time.

I posed a question, asking if music and dance were used as a vehicle to motivate pupils. I was quickly provided with a very clear answer from a male staff member – he told me clearly in English that there was a problem as ‘the children don’t want to engage in white music and culture’. There didn’t seem to be a willingness or even an understanding that using the rich Roma culture to engage pupils in learning could provide rich meaningful experiences for the children.

Our visit continued, our chaperones were refused service in restaurants due to the fact they were identifiable as Roma, their skin colour and ability to speak the Czech language fluently identified them as Roma. The discrimination was not only experienced by our Roma colleagues but also by other colleagues attending the trip, we all experienced people moving away from where we were standing / sitting on the bus and tram and also in the service received in both shops and restaurants. There was nothing hidden about this discrimination – it was open, it was accepted, and it was part of daily life. It became clear why our chaperones and our families have chosen to call the United Kingdom their home. A place where they are accepted for who they are, a place where they belong.

Our visit included a trip to a Roma museum which was fascinating. So much positivity about the richness of Roma culture that I wanted to capture for use back at school. The positivity was short-lived. Nearing the end of the museum tour we came to a section where video clips of one of our Chaperones were playing. Our new colleague and friend described himself as a human rights activist who has had to give up the fight for acceptance for his safety. He talked about this again later in the trip when he commended some inspirational friends in their ongoing campaigns to improve the situation for the Roma in the Czech Republic. He talked about turning his back and leaving his friends to ‘fight the fight’.  All three of our chaperones are an absolute inspiration and engaging with them and the work that Compas Charity is involved in is helping to improve the lives of Roma children / communities in Wales, in the UK and all over the world.

So as an educational leader from Wales what key lessons have I learnt?

I have a much clearer understanding of lived experiences of some of our families in their country of origin and I have a deeper appreciation of how great Wales is and how powerful the ongoing work is to ensure that everyone is accepted for who they are. Several key points will influence my work further:

An understanding that the racial discrimination that Roma communities face in the countries they have once called home is key to getting provision right in Wales.

An understanding of how practices in European countries have been designed to segregate Roma from Czech citizens is important. When children are segregated in mainstream schools what message does this send to the children and their parents?  Any segregation can do more harm than good and should be considered carefully.

Our Roma families have not grown up believing that they can be involved in all areas of society. Schools have a key part to play in raising aspirations for Roma pupils by ensuring representation across all areas of education and need to work with families to ensure they understand the importance of education.

Being clear about Roma experiences with professionals – teachers, doctors, police and social workers and how they are racially discriminated against so openly in the countries they call home is key to building effective relationships in Wales.

Being open to learning about the challenges our Roma families experience will help us to better understand how they interact with professionals in Wales. Understanding why will enable us to ensure that the vision of the curriculum is realised for all those who choose to call Wales ‘home’ and for those who want the opportunity to learn and thrive not only in school but in the wider communities of Wales.

The Roma activists and human rights fighters in the Czech Republic that we talked with were all clear about one thing, their families all valued education and they were all pushed to do well in school and in their studies.  The impact of parental engagement in school is often an area highlighted in Wales as an area to be developed.  Schools and wider services have work to do in raising the aspirations of families as well as pupils in school because all children have a right to a high-quality education.